What did Frittenden do in WW1? 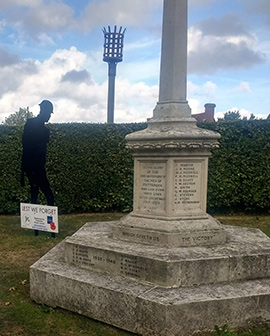 To mark the centenary of the Armistice which ended World War I, Frittenden Historical Society staged its largest ever exhibition in the Memorial Hall over Remembrance weekend 2018.

The exhibition looked at those who served in the war, and those who did not return, but also considered what life was like during the long years of the Great War.  We wanted to illustrate the contribution made by the men and women of Frittenden to the war on the home front and the extent to which nearly every household in the parish was directly affected by the conflict.

We used contemporary letters and diaries, service records and other local sources, along with artefacts such as Reverend Rupert Inglis’ communion set.

The exhibition could not have been staged without the support and help of many people from Frittenden and beyond.
We are thankful to everyone for their support.