One of the first direct effects of the war on the home front was the fear of food shortages. As soon as war was declared, Kentish housewives immediately worried about their emptying larder shelves and began besieging the shops and stockpiling food. At first grocers let them have what they asked for.  Panic buying forced prices up within days.  Soon shops were shutting as they had more orders than they could deal with.  In those days there were no refrigerators, so meat and other fresh produce was bought as and when required.  Within weeks the local press was advising its readers to “Buy British” and “Support your own country”.

Good harvests and little interruption to food imports during the first years of the war meant that there were no actual shortages of food, although distribution was sometimes difficult.  The agricultural situation deteriorated in 1916 with a poor harvest, failure of the potato crop and increased shipping losses.  After this people were encouraged to grow vegetables in the back gardens and allotments.  This poem by a Kentish allotment holder appeared in the local press: -

Life in Kent during the war years

Home life changed with the start of the war. In addition to the direct effect of air raids on Kent, the county also suffered from attacks from German warships that shelled coastal towns.

In April 1917, in one attack, 300 shells were fired from German destroyers on Ramsgate, Manston and Margate. Fortunately, loss of life from that raid was minimal, but such raids brought the reality of war home to the people of Kent.

A blackout was imposed early in the war. Street lights were left unlit. At that time most people lit their homes by gas mantles. As the war progressed, coal supplies became short. When the price of coal rose as a result, gas works reduced their production. Pressure dropped and lights dimmed which caused problems in the winter months.

Getting around became more difficult. Most of the railways were requisitioned to move the thousands of troops passing on their way to the Front.  Horses had been taken to help in France.  This caused problems in the fields of Kent, as did the shortage of manpower.  Women working helped the labour shortage, but caused an increase in child neglect, however, working together and supporting each other through some very dark days, things slowly improved.  The cinema became an important place to help escape the problems of everyday life. In February 1915 the King’s Electric Theatre in Ramsgate used this slogan, published in the local press:-

On nights like these when lights are low
The Picture Palace is the place to go. 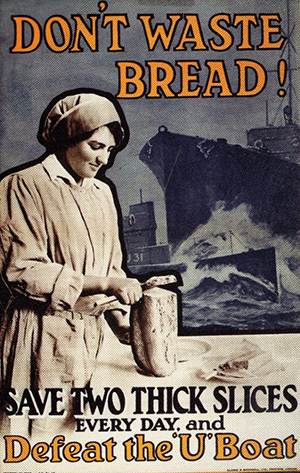 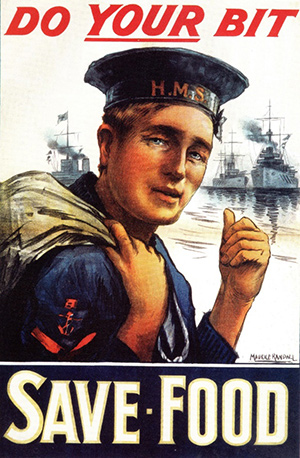 By March 1917 the U-boat campaign had made food supplies short and queues of women and children waiting for food became a common sight.

Poster campaigns urged people to economise.
One poster, particularly relevant to Kent and its ports carried a “message from our seamen” to say they were risking their lives to bring food to the people, so it was up to them not to waste it. The newly introduced summer time daylight-saving plan also meant it was possible to work later on their allotments for several months of the year.

The organisers claimed that:-
If every man, woman and child in Kent bought just one VAD stamp each, £5,000 would be raised.  Let us do our bit to make sure our brave men who have been wounded lack for nothing in our hospitals.

Everyone was urged to do their bit. 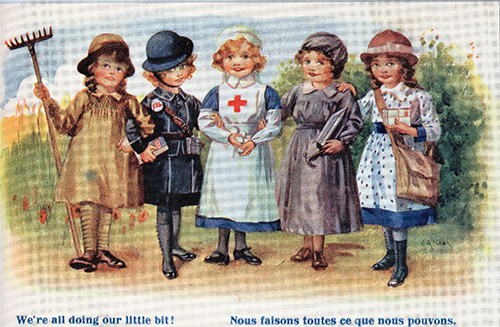 The first recognised attempted raid on Britain by an aeroplane occurred on 21st December 1914 when a Friedrichshafen FF29 dropped a bomb which landed harmlessly on a cabbage patch in a garden in Dover.  The pilot, flying at 5,000ft, had to lift the bomb with both hands, control the joystick with his knees put the bomb over the side and let it go. He was thought to be aiming at Dover castle. This method of bombing helped reduce the risk of damage from raids during the early part of the war. Fragments of the bomb were later presented to King George V.  A more serious threat came from Zeppelins, which were able to carry incendiary as well as high explosive bombs. Kent was a frequent target of the Zeppelins. One Zeppelin dropped a bomb on a farm in Rainham, killing a horse, before it arrived at Gravesend where it dropped five HE and three incendiary bombs. Houses were wrecked and the damage was quite extensive.  Zeppelins were attacked by British aircraft without much success.  More success was achieved when British aircraft bombed the airship sheds in Belgium.

The night of 13/14 October 1915, saw five airships over Kent. This resulted in 25 deaths and considerable damage to property. The Zeppelins had had a good night and though there were more raids to come in 1916, by the end of that year they were largely a spent force.  East Kent, however, was to suffer its own particular problems over the next year, with regular raids from German seaplanes, which were based in Belgium.  These raids continued, but notwithstanding the frequency of attacks on East Kent coastal towns, civilian casualties had been relatively light.
Things took a serious turn for the worse with the arrival of German Gotha bombers. 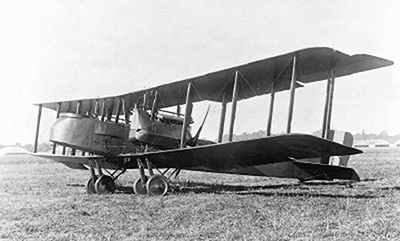 These planes could fly higher (up to 18,000 ft), were fitted with bomb aiming equipment making them more accurate.
September 1917 saw the first German aircraft raid by moonlight by more than one aeroplane.  The raid on Kent caused some 230 casualties, mostly military. Over 130 naval ratings were killed and many more were wounded when 2 bombs were dropped from Gotha planes on the Drill Hall of the Royal Naval Barracks in Chatham.  The drill Hall was being used as overflow accommodation, with around 900 ratings either asleep or resting at the time of the raid. This raid caused the greatest number of deaths from a single raid during the whole of the War.

During the last two years of the war, further frequent and damaging raids were made over Kent, with attacks on all the major towns, particularly along the coast.  Towns inland were not exempt. Aircraft returning from London would drop their remaining bombs anywhere they saw a potential target.  During that time over three hundred civilian Kent residents lost their lives directly as a result of these raids and many more were injured.