The great war and it’s effects on kent

Within days of the declaration of war, amidst much sabre rattling and confidence born of a belief that the cause was just, the British Expeditionary Force (BEF) was mobilised and sent to France. It was from Shorncliffe Camp, near Folkestone, in August 1914, that one element of the BEF set off for France, crossing via Folkestone and Dover, following the invasion of Belgium. 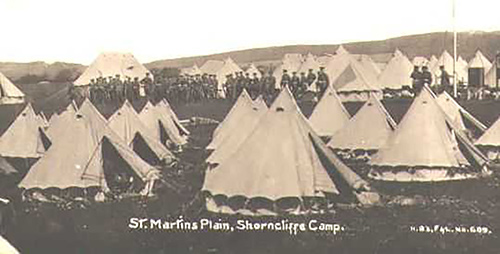 The local East Kent Regiment was known as “The Buffs”. It had received its nickname when issued with buff-coloured soft leather coats while serving in Holland in 1572. The scene which took place at the Infantry Drill Hall at Ramsgate in August 1914 was typical of many which took place all over the county.  The Thanet Times reported that the Ramsgate Company of the Buffs, consisting of about seventy men, were under orders to embark and were preparing for a journey to Dover the next day. Wives, sweethearts and friends called at the Buff’s headquarters to bid farewell to their menfolk, who were eager to go for active service and take their place on the front line.  The departure of local men took the form of a band-led march to the railway station with townsfolk gathered en-route to say goodbye. All too frequently, as the war progressed, the stations became the site of the mother’s or wife’s last glimpse or farewell.

Just before the August Bank Holiday weekend that year, large crowds, families, friends as well as local people gathered at Shorncliffe for the annual inter-regimental sports day.  Little did anyone know that, within a few days, the young men doing battle on the sports field would be heading for France and a battle from which many would not return.

In the early months, the Dover Patrol was set up under the command of Rear Admiral Hood.  Operating out of Dover, it’s role was to guard the Dover Strait and help deter an invasion.

Fear of invasion quickly led to the establishment of a Central Organising Committee by the KCC in Maidstone with a mandate to organise the movement or destruction of livestock, transport, stores, crops and the movement of civilians in the event of such an invasion. 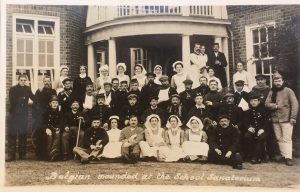 The departure of the BEF was quickly followed by the arrival of thousands of Belgian refugees.  Within days of the outbreak of the war, the people of Kent became the first to witness some of the terrors of war. In August 1914 a flotilla of fishing boats and other small ships fled Zeebrugge in advance of the invading German army. The Belgian army managed to delay the Germans long enough to allow many thousands of civilians and troops to escape. By August 20th of that year, about 64,000 Belgians had arrived in Folkestone. They arrived in fishing smacks, coalers and anything that could float.  They were tattered and torn, tired and scared. They were starving and cold after crossing the sea in open boats.  Soup kitchens were opened to feed them. Many refugees had only the clothes they stood up in.  Local people took them in and let them have a wash or gave them clothes and food. Trains waiting at the dockside dispersed the refugees around the country, whilst more than 15,000 stayed in and around Folkestone. Over the next few weeks and months, tens of thousands of refugees arrived on the Kent coast and were helped by the people of Kent, who provided homes, medical treatment, food and work.