The Passage of Thousands of troops through Kent

The flow of people through Kent to the channel coast continued throughout the war. Following on from the BEF came the country’s Territorial Battalions.  But it was clear that more, many more would be needed and the call went out for volunteers.  A massive recruitment campaign began in August 1914 to find 100,000 men willing to enlist. With the help of the distinctive war poster, that featured Kitchener’s pointing finger and the words: ‘Join Your Country’s Army’, over three million men volunteered in the first two years of the war. The majority of them passed through Kent on their way to France. 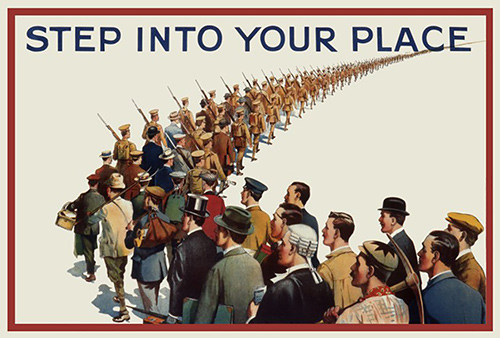 The barracks at Shorncliffe could not accommodate all of the men.  Huts and tents began to spring up.  Men were billeted in local homes and hotels.  Many of the men had to make do with their own clothes, as uniforms were in short supply.  Lack of rifles meant that they had to use broomsticks for training.  Once their training was completed, the men were marched to Folkestone Harbour for the short trip across the Channel to Boulogne and on to the front line.

The numbers became so large that Folkestone was used for troops going to France while Dover took charge of receiving the hospital ships.  Not only was this a logistic move, it was also a sensitive move to avoid the demoralising effect on outgoing soldiers caused by the sight of their wounded comrades being brought home. 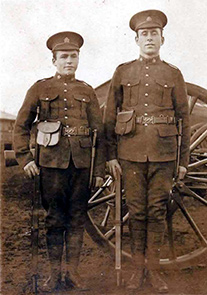 In the autumn of 1914 and in response to Britain’s call to arms, the sons and daughters of her Empire also volunteered in their hundreds of thousands and Kent saw the first contingent of 30,000 Canadian troops arrive at Shorncliffe, including the Charles and Edward Homewood from Bubhurst.  The men had had basic training at camps in Canada, but the real work was done in Kent.  On the hills around Folkestone and Dover a system of trenches had been dug as a precaution against invasion.  These enabled the thousands of troops training for the front to practice the skills needed, including “going over the top”.

It wasn’t just men who crossed into France. Some 7,000 women of the WAACS also came to Kent for training in Folkestone, before they, too, set off for France to take up duties as drivers, mechanics and other jobs, which would free up men to fight.

Barely had the British Army sailed for France in August 1914 than the first of the wounded began to arrive home. To start with, their arrival aroused great interest and excitement. The soldiers were taken by motor cars through Folkestone to Shorncliffe Military Hospital, being greeted enthusiastically by the crowds in the streets. During those early days there developed something of a carnival atmosphere as people came to the docks to watch the ships arrive with the first of the wounded.  That atmosphere didn’t last, as the months and then years went by and the number of returning wounded increased, the stark reality of modern warfare was brought home. That increase put an enormous strain on local hospital services. To cope with the increase The Shorncliffe Military Hospital and the Royal Victoria Hospital in Folkestone were bolstered by converting local hotels, convalescent homes and country houses into hospitals. In January 1915 the Granville Hotel, one of the best-known seaside hotels in Ramsgate was requisitioned by the Government and became The Granville Canadian Special Hospital. It mainly treated patients suffering from shell shock, nerve injuries and injuries to bones and joints. In April 1917 that hospital accommodated 809 wounded Canadian soldiers. 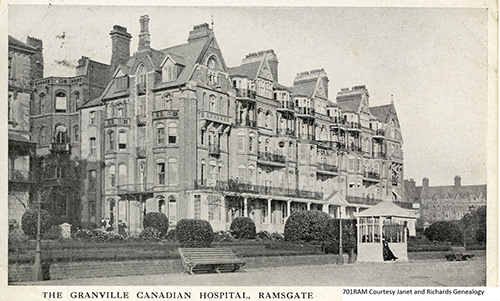 Many of the wounded were nursed by local female volunteers, while the manual task of getting the wounded to the hospitals fell to their male counterparts.

Some of the wounded required plastic surgery.  The first specialist centre for this was in Kent at Queen Mary’s Hospital in Sidcup.