At the end of the War it was felt that some form of Memorial should be established to commemorate those villagers who had given their lives.

Parish Council minutes show that there were several proposals put forward as being a suitable Memorial:

All of these were rejected largely on the grounds that they were too expensive. 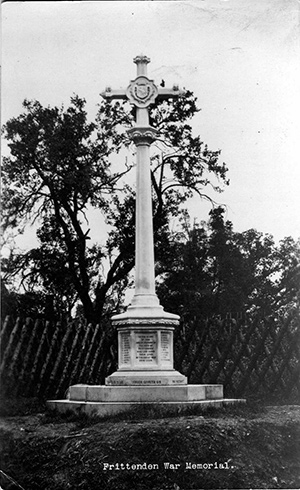 The matter was resolved at Parish Council Meeting held on 14th October 1919 when the following resolution was passed:

"that a memorial bearing the name of the men of Frittenden who have given their lives for their country be erected in some public place in the village at a spot to be decided by the Committee. That the form of the Memorial shall be as the Committee may decide"

It was also proposed and passed that the profits made from the sale of Parish Jam should be handed to the War Memorial Fund.

The land on which to place the Memorial was donated by Mr A Cook of Manor Farm.